9/11/2020
The start of the school year is upon us and there are some new faces who we are very pleased to welcome to campus!
Katherine Barres - World Languages
Ms. Barres studied at the College of the Holy Cross and graduated with a degree in Spanish and Latino studies before beginning her teaching career as a middle school Spanish aid at St. Paul’s School in Hingham. She also studied at the Universitat de les Illes Balears in Mallorca, Spain, for a year. Ms. Barres’s favorite class to teach is introductory Spanish. “I love to help establish a love for language,” she says.
Drew Collins - Counseling Intern/Instructional Mentor
Mr. Collins is currently a senior at Emmanuel College in Boston, majoring in counseling and health psychology. This year, he will have two roles at Xaverian as an intern in the school counseling department, and as an instructional mentor. Overall, he is very excited for the upcoming year. He says, “I am eager to find solutions to whatever challenges may appear as a result of the continuing difficulties of the COVID pandemic.”

Andrew Klim ’15 - Instructional Mentor
Mr. Klim returns to Xaverian as an instructional mentor after graduating from Merrimack College with a bachelor’s degree in communications and media studies. He is excited to work at Xaverian because “I enjoyed attending classes here and I'm excited to help students have the same great experience that I did.” Mr. Klim adds that he feels the best part of teaching is having engaging and enlightening discussions when the entire class gets involved.
Dee Lane - Director of Advancement Operations
Mrs. Lane is joining Xaverian in the advancement office and has spent the past two decades working in higher education. She has a Bachelor of Science in business administration from the University of Massachusetts Lowell and a master’s degree in business administration from Bentley University. Mrs. Lane says she chose Xaverian because her three kids graduated from a Catholic high school and she loves the environment.
Daniel McDonough ’15 - Instructional Mentor
Mr. McDonough returns to Xaverian as a teacher after graduating with a Bachelor of Science from the University of Rhode Island. “The best thing about teaching is by far being able to see the progress students make in their learning,” he says. Mr. McDonough is looking forward to being back and meeting the next generation of Xaverian students.
Barbara Mitchell - Counselor
Ms. Mitchell holds a Bachelor of Arts from Marietta College in Ohio and Master of Education from Emmanuel College. She spent the majority of her professional career working for single-sex, Catholic institutions, at both the high school and college level. “The best thing about counseling,” she says, “is building relationships with students and having the ability to help them see their potential for high school and beyond!”
Nancy Murphy - Administrative Assistant for Student Life
Mrs. Murphy joins Xaverian in the student life office this year. She is a graduate of Villanova University with a Bachelor of Science in business administration. She says that she is excited to work at Xaverian because of its reputation as a place that forms young men’s development, intelligence, and integrity.” Mrs. Murphy also owned a vintage market for many years and most recently worked for the Westwood Public Schools.
Alexander Ramirez - Counselor
Mr. Ramirez attended the University of Connecticut to study psychology as an undergraduate. After graduating, he attended Fairfield University to pursue a master’s degree in school counseling. “I am thrilled to begin and be a part of the Xaverian community,” he says. According to Mr. Ramirez, the best part about counseling is being able to help each student find the success that they want for themselves.
William Ricciardelli - Fine Arts
Mr. Ricciardelli has 24 years of experience in the field of music education and holds a Bachelor of Music from the Berklee College of Music. Having been raised in a Catholic home, he notes that the values found at Xaverian are very important to him both personally and as an educator. Mr. Ricciardelli most looks forward to building relationships with students and faculty, as well as seeing the growth in students throughout the school year.
Christopher Roche - Computer Science/X-Ploration Center
Mr. Roche brings experience to Xaverian as a lawyer, teacher, and artist. After earning his B.A. in computer science at Dartmouth, he attended the University of Pittsburgh Law School and earned his J.D. After serving as a law clerk in the New Jersey Supreme Court and working in New York City for a number of years as an intellectual property attorney involved in computer litigation and software licensing, Mr. Roche pursued his passion for the arts and earned his B.F.A. from the Rhode Island School of Design. He is excited to work at Xaverian and says that, “the energy at XBHS seems great and the X-Ploration Center is AWESOME!”
Catherine Sciortino - Science
Ms. Sciortino says she chose Xaverian because of the community atmosphere. She holds a Bachelor of Science in biology with minors in chemistry and art from Saint Joseph’s University in Philadelphia, and a Master of Secondary Education from Providence College. Ms. Sciortino’s favorite units to teach during the year are genetics and biochemistry. She adds, “The best thing about teaching is getting to know my students and finding ways to relate content to their lives.”
William Wallace - Mathematics
Mr. Wallace joins the math department with excitement to “start a new chapter in his life, and use the skills he has learned in a new setting.” He says that the religious aspects of working at Xaverian were the one thing missing from his teaching career after growing up in a Catholic home. His favorite class as a child was always math. Why? “It's logical, and always makes sense.” Mr. Wallace holds a Bachelor of Science from Bridgewater State University. 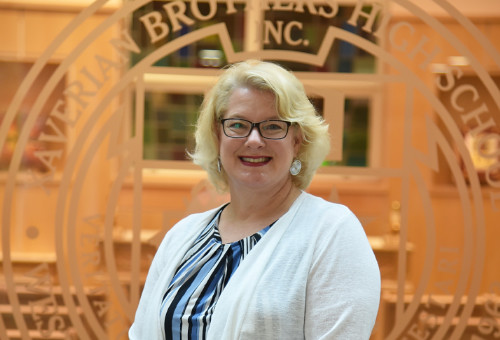